My town has 56,339 inhabitants. This morning, when I opened the window, it smelt as if every single one of them had just farted.

The noxious gases billowed in and tinged the kitchen air a mustardy pea green. The whiff was coming from the local sewage works, whose manager feels that complying with health and safetly regulations is a terrible waste of his money. I estimated I could last 30 seconds before running out of oxygen completely and, clutching my throat in panic, I turned on the air conditioning.

It was the first time I had used it this summer, and nobody had washed the filters yet. Out flew a couple of kilogrammes of dust and approximately 7 million dustmites.

I ran up to the bedroom zone and stayed there for ten minutes, breathing deeply of the invigorating smell of “teenage boy”. (My son is only seven but they grow up fast these days. Also, he has a congenital foot cheese problem. He can’t help it, it’s glandular.)

“What a terrible pong of broken glass,” my Welsh grandfather used to say when someone let out a bum quack. Or he would wrinkle his brow. “Now there’s a nasty whiff of wire bending.”

Apparently all the Welsh coal miners used euphemisms like that. A fart in a coal mine is most unwelcome, of course. It won’t exactly get carried away on the breeze. Apparently, a really bad one could linger down there FOR DAYS AT A TIME.

Sicilians are fart conoisseurs, and they’re not as coy as Grandpa was. The Sicilian language has different words for different types. A sgureggiu is the ninja type, silent but deadly; A pirittu is the show-off variety, rattlingly loud; after doing a luffione you have to rush off and change into fresh underwear. You get the idea.

After a while I decided to re-test the outside air, so I opened the window a crack. This time my nostrils were assailed by an acrid cloud of smoke from burning car tyres and possibly a chemical fire. This smell came from a local entrepreneur, who has opened up a business accepting old tyres and other industrial waste from far and near, for a fee which undercuts the local council. It crossed my mind that he was lucky not to explode in a giant fireball, considering the dense clouds of methane that were billowing all around town. By this time I had gone into industrial phenol-induced bronchospasm and only just got the window catch down before slipping to the floor. I may have suffered a small amount of brain damage.

I decided to just leave everything closed at that point, and get my son ready for school as fast as humanly possible.

“No you don’t really need breakfast today. Hurry up!”

“It’s OK, you don’t have to brush your teeth today. Chop chop!”

“Alright, you can eat the toothpaste if you’re hungry. Just get your shoes on!”

Eventually, he innocently asked me:

“Mummy, have you done a wooftie? It’s very whiffy in here.”

“No darling, it wasn’t me. Ok, you can go to school without your shoes on. Let’s GO!”

All I wanted was to get away from this Little House of Smells and make my way to somewhere I could actually inhale oxygen.

I drove all the way with the window tightly shut and then, when we reached the school, I realised I simply was NOT going to breathe today. At all.

For this is what I found parked opposite my son’s educational establishment: 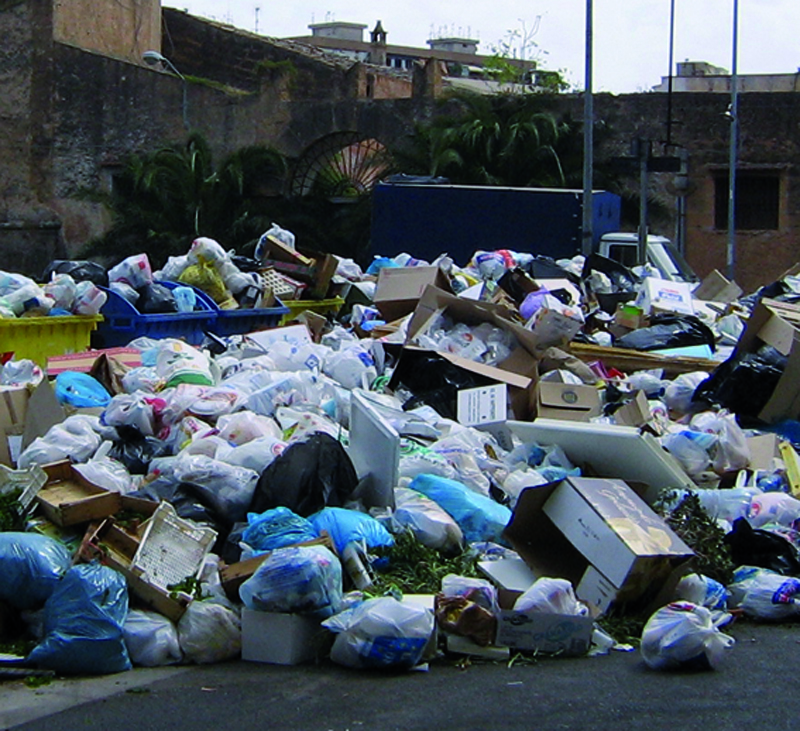 You can imagine what that smells like in the Sicilian heat. It was buzzing with a milion mosquitoes and flies. I’ve no doubt there were cockroaches and rats in its deeper strata.

Driving home after abandoning my poor little boy to his fate, I saw that this wasn’t just one horrible spot. There were mountains like this at intervals along every street in town. I am sorry to say that modern technology does not, as yet, allow me to convey the smell of e. coli- and shigella-induced decomposition to you through cyberspace… though it’s so potent that, if you open your window wide, you may just catch a whiff of it wherever you live, borne on the wind.

After a stomach-turning wait at the traffic lights, I was pulling out round a heap of rubbish and suddenly it started to seethe and shift: about 100 plastic bags of stink had buried a parked car overnight, whose owner had somehow excavated his way through it to the driver’s seat and decided to take off out of it, like a zombie emerging out through the mud of his grave.

In some roads there were refuse-related traffic jams, where a two-way street was reduced to a single lane and the vehicles travelling in each direction had to take turns to get through the bottle neck.

If you could see under the particularly large mound at the far side of that photo above, you would know that there are three recycling bins under there. When they first appeared, some idealistic and delusional people, myself for example, happpily separated their rubbish. Then we noticed that the bin men tip everything into the same lorry, mixing it all back up again. After that, we started putting our old squashed bits of cannoli into the glass recycling bin and uneaten tangles of spaghetti in the plastic one. What the heck!

Yeah, this is what happens when your town mayor outsources refuse collection to a company that is actually Mafia Incorporated. We pay among the highest rate of taxes for refuse collection in Europe, and the refuse stays where we leave it. Where does our money go? It pays colossal salaries to Mafiosi who have got out of prison, and are employed as refuse collectors. There are so many of them that we almost have enough for one bin man to every 30 citizens, and their salary is Euros 50,000 a year – that is over US $60,000. And they don’t actually collect the refuse.

Last year, the new town mayor tried to cancel the contract signed by the previous mayor and was quite seriously beaten up, so he backed down and continued paying.

You may think “fair enough”, but I don’t. If you stand for election in Sicily, at any level, you KNOW this danger is part of the job. You KNOW you may have to get a 24 hour armed escort for yourself and your family, if you do the right thing and govern honestly. And you get paid a truly colossal salary for your pains.

The mayor of a tiny town like mine is paid a small fortune. By the time you go up to the members of the national parliament in Italy, most of whom are responsible for a region with less than 200,000 inhabitants, the salary is more than Barack Obama earns. Check that on Google if you don’t believe me.

Some members of the public resort to setting fire to the heaps of rubbish. This is of course dangerous, not only because the fires could spread, but because the burning rubbish releases highly toxic gases into the atmosphere. Yet what else are you supposed to do when you cannot get through your own driveway because there are about 14 tonnes of plastic bags in front of it, full of used nappies, food packaging and rotting fish heads? And are the rats and cockroaches that swarm in and out of the rubbish heaps any less of a public health hazard than the noxious gases produced by burning them?

The town tayor, on the town council’s website, denouced people who set fire to the rubbish as “vandals.” Am I the only one who thinks the concept of “vandalising rubbish” is funny?

Well, is there a silver lining to this cloud?

Besides the rubbish crisis, we have an economic crisis too. I have started seeing people picking through the rubbish on the streets lately. Every time I drop my son at school, there is someone there, having a look for anything that could be useful; you never see more than one person (unless they are gypsies), as any Sicilian would find it too humiliating to be found in this activity, so they vanish when they see someone they know.

So, the people with money throw stuff away, then the really poor people take it home and use it all over again. That’s recycling, Sicilian style. How ecological!