In England, Christmas and New Year and all that jazz are pretty much over now. People are ready to think about diets and other unpleasant stuff. 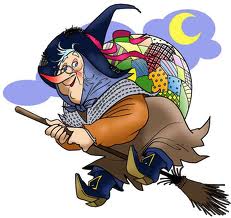 Not in Italy. Oh no! The 6th of January is La Befana, the festival more religiously known as Epifania or Epiphany. Christmas gluttony ain’t over till she’s been!

In these modern times of lax discipline and parents caving in at every turn (I include myself wholeheartedly in that condemnation of modern parenting, by the way) we don’t give kids coal any more. We give them black gnarled lumps of sugar that look like coal. My brother-in-law, whose naughtiness remains legendary throughout Palermo, received this coal every year. He was about 21 before he admitted to his mother that he actually liked the black sugar lumps more than any other type of sweet.

In researching for this post I found out that first ingredient for this sugar coal is vodka or pure alcohol. Ha! No wonder! If you want to try making it, here’s a recipe in English.

Well, I do hope a few of my readers may have noticed my absence from Blogland for the last month or so. I’d like to claim I was in Lapland visiting Santa, or some similar fun excuse, but actually I was stuck in the Palermo traffic.

The reason for this was that they put up the Christmas lights. This makes driving even more dangerous than usual.

Let me explain. Sicilians love multi-coloured lights so much that, in many towns and villages, they leave up what look exactly like Christmas lights all year round. When it’s Christmas, therefore, they need to pull out all the stops and have EXTRA lights in EXTRA colours. This is so disorienting you cannot figure out where the actual traffic lights are at all. You think you are being instructed to pull into a busy intersection, when in fact you are being exhorted to adulate the Holy Virgin Mary for giving us Baby Jesus, the light of the world.

As I said, Sicilians adore coloured lights. This must be why so many of them regard traffic lights purely as decorations. Red in particular. Red is regarded as the classic summer colour in Sicily, and all Sicilian men own red trousers for the summer months, yet it is also epitomises Christmas. This makes it simply ideal for year-round street illumination.

Car parking is a uniquely challenging activity in Sicily. With everyone doing their Christmas shopping, it was of course doubly difficult. Finding a space for your Fiat can take more time than actually driving across Palermo to your destination. Smarter drivers than you will budge in front, drive the wrong way down one way streets, and mow down toddlers in their quest to get into that tiny gap before you do.

I recently underwent the astonishing experience of waiting, indicator-a-flashing, for a car to pull out of a space outside the bakery and then pulling forward, only to find that I was beaten to the spot by a red Fiat Cinquecento (festive!) which had raced along the pavement behind seven parked cars, all the way from the crossroads, to insert itself into the space from the other side.

This almost made me want to turn into the Befana witch and throw knobs of coal at his vehicle till he moved on, or at least suffered damage to his wipers.

Finding your parking spot is only the first part of the ordeal. Now you have to obtain a “scratch and win” type parking ticket to put on the dashboard. You must wander round asking pedestrians or shopkeepers if they know the whereabouts of the nearest café which happens to stock the relevant tickets. But woe betide you if you buy the wrong type of ticket! You need to tell the bar tender precisely where you car is parked. Then you search for your silver Fiat Punto among all the other silver Fiat Puntos, and scrape off the relevant numbers to display the time and date you parked. It is more of a “scratch and lose” activity to be honest.

When you do finally discover a space, figure out which type of parking ticket you must display on your dashboard and even hike to a bar which sells the tickets, you will only return to find that you have been boxed in by someone double parking. In many districts of Palermo, double parking is for the goody-two-shoes whilst triple-parking is de rigeur for the more relaxed motorists.

Sicilians often lament the fact that they are highly strung and fly off the handle at the drop of a hat, wishing they had more of what they perceive as our “Anglo-Saxon self control” (the correct pronunciation of which is self con-trrrrrroll). Yet I am continually astounded at the phlegm they display when finding their car boxed in by a melée of about twenty vehicles.

They will patiently sit in their car or stand near it giving the occasional laid-back hoot on the horn for simply ages, waiting for the owners of the other vehicles to amble out of the bank, pharmacy or some other establishment. Then everyone rearranges their cars to let one out, double parking them again and slowly dispersing back into the various shops they were perusing. If someone found themselves boxed in by a double-parker in England we would call the police without waiting ten seconds and some impulsive types would possibly succumb to road rage and vandalise the offending vehicle.

On the subject of hazard lights, please note that it is mandatory to turn them on whenever you are parked dangerously in a strictly no parking zone, such as blocking the entrance to an ambulance bay. Oddly, though, this is not to conform with Sicilian Christmassyness Regulations. The hazard lights tell people you are only there briefly, and for a critically important purpose, such as to get some new Christmas tree lights, swig down a coffee in a nearby bar, pick out a few pressies for your 236 aunties and hastily grab a deep-fried spleen sandwich on-the-go.

Well, I must dash off and try to find a parking space so I can pathetically buy my son a few black sugar lumps and some sweets as well. He’s been rather naughty this year but I am too feeble to be as witchy and harsh as I should.