One of my little boy’s milk teeth fell out recently. He now has two outsize grown-up size teeth at the centre of his mouth, and a space each side of them. He looks like a rodent.

“Do you want to leave it under your pillow for the tooth fairy?” I asked him.

“Or do you want to leave it in a cup in the kitchen for San Nicola?” asked his father.

Yes, Italian children give their teeth to Saint Nicholas. Finally, now you know what Santa does all year while waiting for Christmas to come around again. He goes to Italy and dashes about collecting all the kids’ little teeth.

It’s a marvel he’s so fat with all that work to do – it must be the Italian food. I wonder what he wears in the hot Italian summer? And does he get in via the chimney as per usual?

SAINT NICHOLAS WITH A SACK FULL OF ITALIAN CHILDREN’S TEETH

In fairness, he doesn’t actually deliver Christmas presents to children in Italy. That job is done on January 6th by the Befana, a friendly old witch who puts gifts in your stocking if you’ve been good, and a knob of coal if you’ve been naughty.

Choosing between the Tooth Fairy and Saint Nicholas is one of life’s complex challenges for my son. They both leave money and maybe a little toy in return for the tooth, so the choice has to be made on ethical grounds.

“What does Saint Nicholas do with the children’s teeth?” asked my son.

“Erm, I don’t know,” confessed Daddy. “What does the tooth fairy do with them?”

“Cor, don’t you know anything?!!! She makes them into magic fairy dust, to recharge the power in all the fairies’ magic wands!” explained the little lad.

THIS IS NOT MY MOTHER-IN-LAW, THE GODMOTHER. THIS IS A FAIRLY ODD FAIRY GODMOTHER. 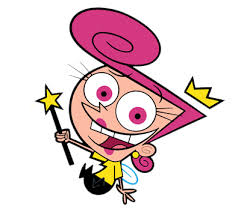 He decided the tooth fairy was getting his tooth, again.

“I’m half English and half Italian,” he reasoned, ” and my teeth are one of the English parts.”

So, I am curious to know, what do children do with their baby teeth where YOU come from?