Most of it is closed for restoration, but there was still plenty to enjoy. 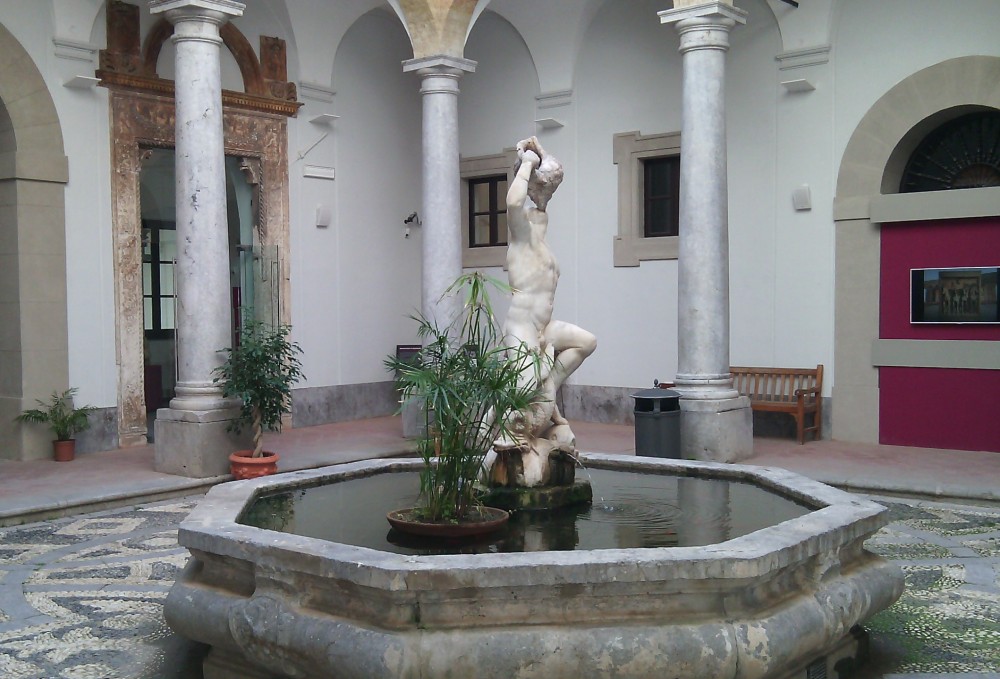 I sat for ten minutes serenely enjoying the sound of the fountain before exploring the part of the museum still open.

Can you guess what this is?

It’s a Roman bath tub, found in Agrigento in southern Sicily. I love the fish and little faces all over it. Are the feet on the top are to remind you to wash carefully between your toes?

Whilst the Romans loved their public baths, they were not really places to get clean. They were public swimming pools, saunas, massage parlours and medical treatment centres where the “medicine” usually consisted of rituals to expel the evil eye or other malevolent spirits. The water was warm and not chlorinated, and many a Roman who visited the baths with a little cut came home with gangrene.

If you wanted to cast the evil eye on someone, this was what you would need:

It’s a little Roman altar for offerings. There are altars like this dotted around Pompeii in the streets and small piazzas. Some were for particular gods but some were general-purpose altars.

When you wanted to curse someone, you would write a little message on a sheet of lead, in which you “donated” them as a religious offering to Pluto and the other gods of Hell. The Romans often cursed people like this when they had lost a legal case or been ripped off financially.

To make the curse work you had to sneak out at night and do it by the light of the moon: this was when all the naughty gods were paying attention.

One of the ways you could ward off this evilness was to wear a pendant of Medusa or one of her Gorgon sisters, all of whom had hideous features and writhing snakes for hair. When you went into battle it was most certainly a good idea to have one embossed on the breast plate of your armour, as in this statue from the 1st or 2nd century A.D. found in Tindari, western Sicily.

How would a Gorgon save you? Well, she was so ugly that one glance of HER evil eye would turn anyone to stone. So if someone tried to curse you, your Gorgon friend could curse them right back with knobs on.

The Greeks loved using Gorgons to protect buildings as well, usually around the eaves just under the roof tiles. Their glorious ancient city of Siracusa in Eastern Sicily was full of them – you can see them in the archaeological museum there.

The gargoyles on medieval churches evolved out of these Gorgons. Medieval Christians were extremely concerned about warding off the evil eye. The Christian stone masons had to design random ugly faces to ward off the evil eye rather than copying Gorgon faces, to prove they were not pagans.

If all precautions failed and you actually did die, a coffin like this would give you a grand send-off. This coffin dates from way before the Roman period, though. Roman coffins looked like little houses with sloping roofs and sometimes even guttering details around the edge.

This was made by Carthaginians of North Africa, who invaded Sicily before anyone else did. Notice how close it is in shape to an Egyptian sarcophagus. The Carthaginians had a religion, language and culture which was a fusion between the Phoenician colonists’ culture from the Middle East and the different culture they found among the Berbers of north Africa, with whom they intermarried.

Most of these exhibits were around this lovely garden courtyard, which had some flowers in it giving off a heavenly perfume. 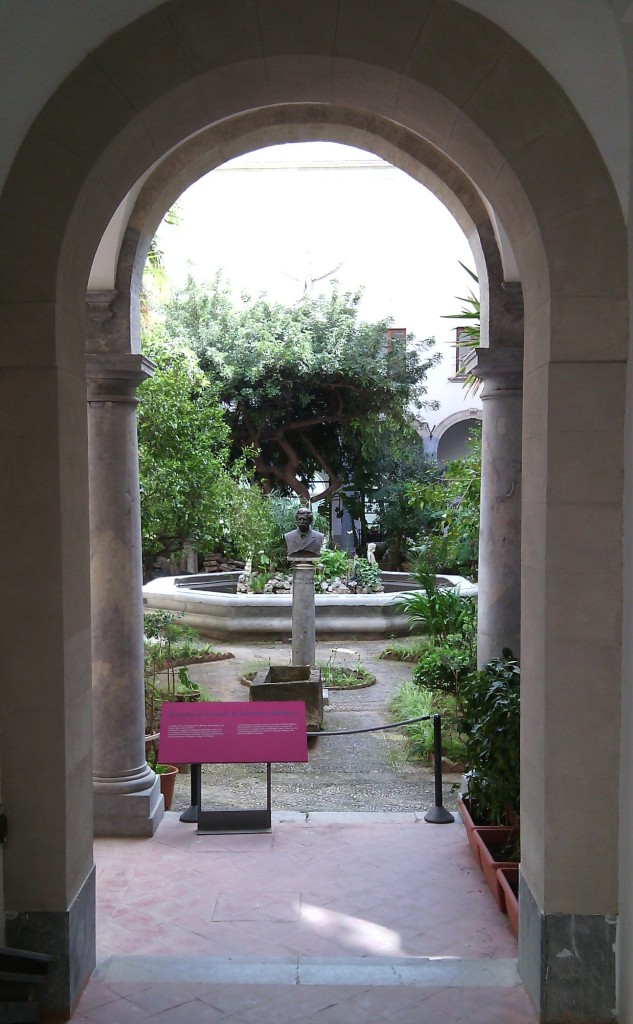 Back inside, one of my favourite items was this beautiful stele of Vestal Virgins.

These were Roman priestesses who devoted themselves to the goddess Vesta. They were chosen at the age of six and could retire aged about 30, after a life of great freedom and privilege on condition they remained virgins and made sure the sacred fire of Vesta never went out. If they failed on either count they would be buried alive and this did actually happen twice in Roman history.

Vesta was the Roman goddess of the hearth fire and the home, of motherhood but also of virginity. This combination of motherhood and virginity is a theme found throughout the ancient Mediterranean. The Egyptians had Isis, the Mesopotamians had Astarte and the Carthaginians had Tanit. They were all fertility goddesses and virgin mothers, laying the groundwork for the cult of the Virgin Mary which was developed several centuries after Christianity was first practised. It was apparently created to fill a glaring gap in the market once paganism got stamped out.

I personally think this virgin mother idea stems from the fact that everyone finds the thought of their Mum having sex completely gross. 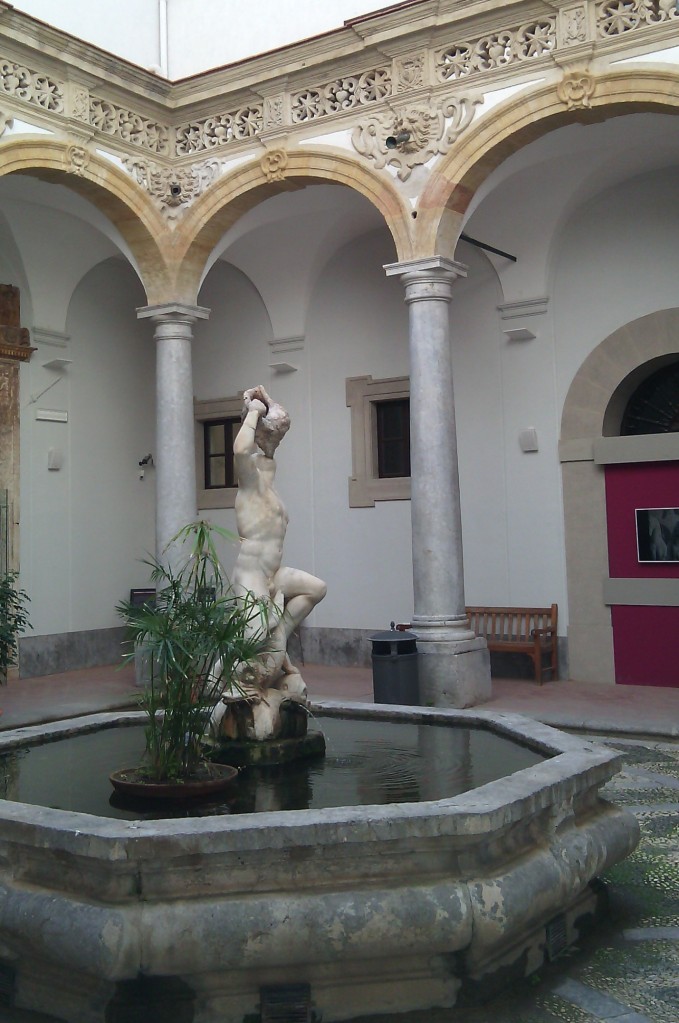 Well, shall we sit for a little while in this lovely courtyard again before heading back out into the hustle and bustle of modern Palermo?

Need some good holiday reading for this summer?
Try my novel “Evil Eye”

You can read some reviews on Amazon here.