I posted some photos of the hair-raising electrical wiring in Lercara Friddi last week. I feel I should do the place justice by showing a more complete picture… so here goes.

Hubby and I went there shortly after the annual festival celebrating the town pie, the pantofola. Pantofola means slipper. They still had some left over, so we walked into the first tasty-smelling bar we could find, and started eating.

The bar faced the central piazza, where the local old boys gather each Sunday to get away from their wives. Hubby wanted to listen to the political candidate who was haranguing them. I decided my own time would be better spent pretending that I know how to use my new camera.

I did see a lot of electrical wiring but I also found that, with careful cropping, you can take photos like this: 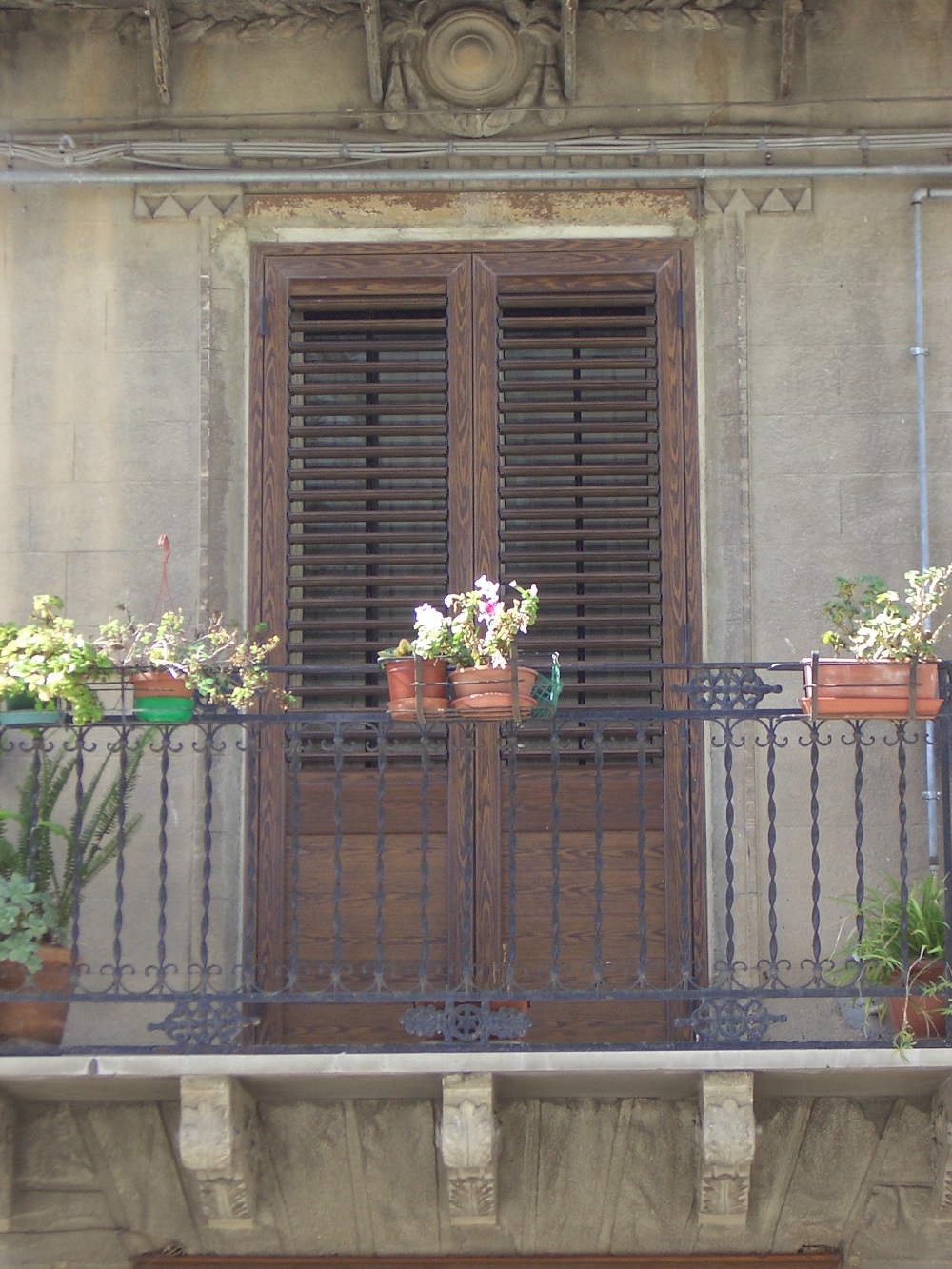 Alternatively, you can ambush unsuspecting oldies to get pretentious armchair travel guide photos, like this:

When that gets boring, you can take arty-farty images for those interior design books that my Mother and gay men leave on their coffee tables:

This one is called “Postboxes” and signed prints of it may be ordered for $3,000 each: 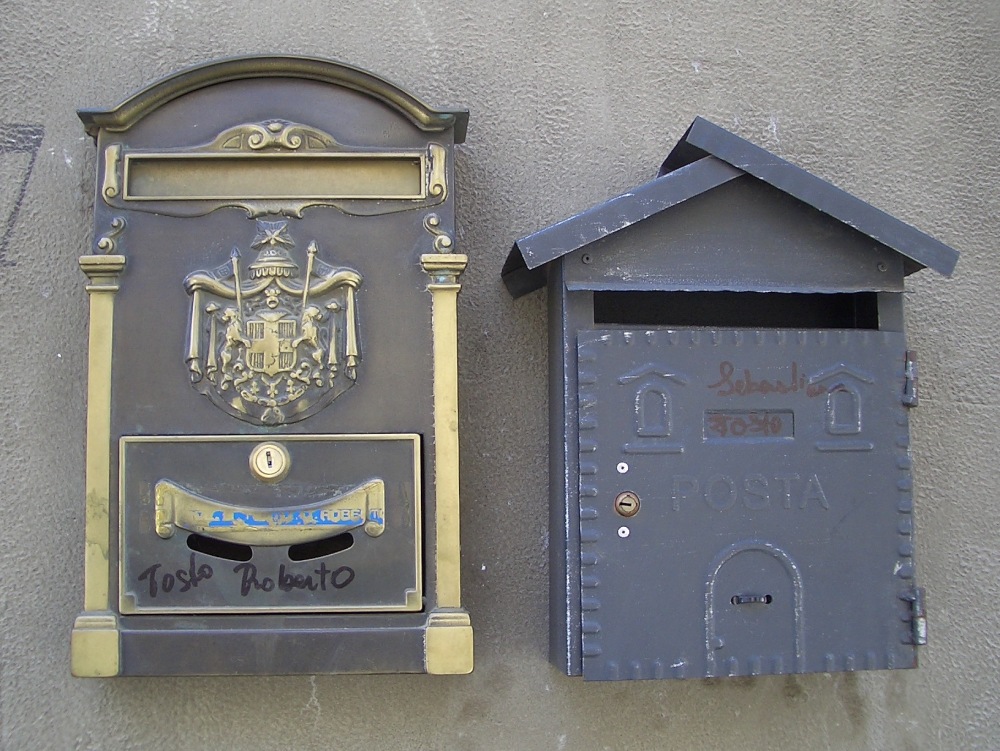 This one is entitled “Italian letter box”, with the alternative title of “Don’t stick anything in here because it will never be seen again”. Framed enlargements of this copyrighted image may be ordered online, but they will never arrive.

After photographing some outrageous wiring, I spotted a horse meat butcher’s shop. Sicilians only eat horse meat when they are ill, as they believe it has special nutritional qualities. They particularly give it to people with anaemia and to children with leukaemia. It is never sold by normal butchers, but only in these dedicated horse shops.

If the horse meat doesn’t work, one may need to organise a funeral. I could not believe the number of funeral posters I saw around Lercara Friddi. I didn’t see a living soul there the right side of 60 to be honest, which may not be entirely unconnected. Sicilians often advertise forthcoming funerals by putting up posters all around town, like this: 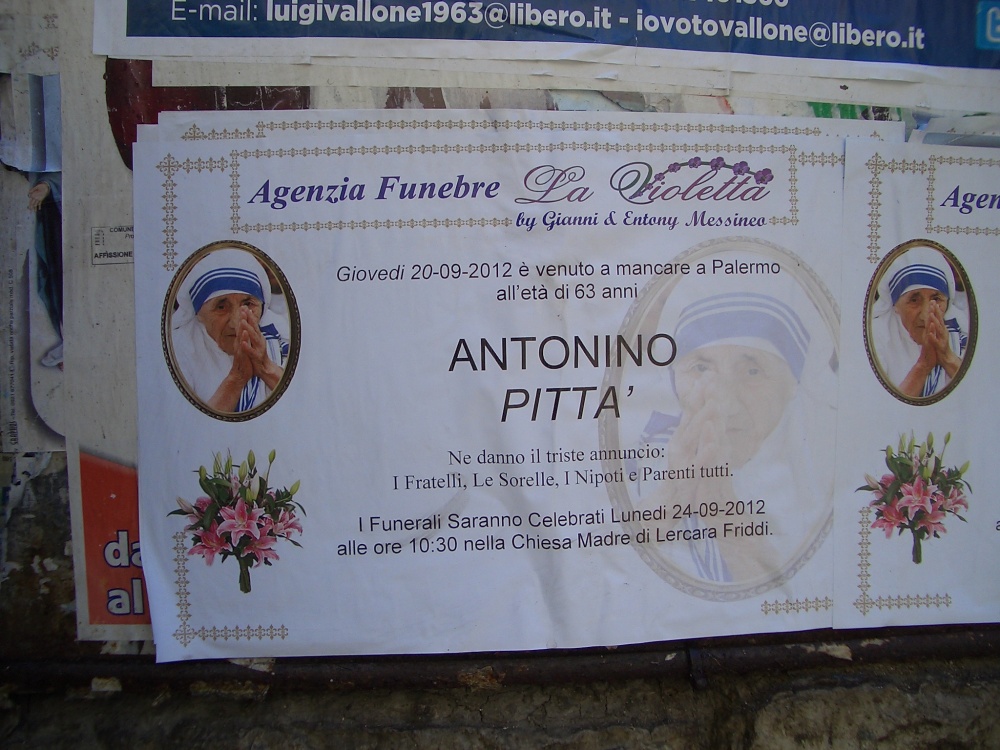 It’s a service offered by the funeral home. They also sometimes put up posters after the funeral as well, thanking everyone who came. Seeing them casually jumbled up with political campaign posters and advertisements for the local supermarkets made me suddenly feel very foreign:

Hubby and I were now starving and headed out of town to meet our friends, who had invited us for lunch. We had a meal cooked by this man. He was clean when he vanished into the kitchen, but when he energed 45 minutes later he was spattered all over with tomato sauce and the kitchen looked rather like a slaughterhouse. I’m sorry to say his wife managed to wipe a President Gorbachev-style dollop off his forehead before I managed to take the photo.

Anyway, the food was delicious.

On the way back into town we saw a few sheep…

…And their shepherd on horseback. Look out Mr. Shepherd! Don’t take you eyes off that trusty steed! The oldies of Lercara Friddi might eat him!

On our way home we were engulfed in smoke and realised that a fire was raging around a house just outside town.

“That was probably caused by an electrical fault” said hubby, as we callously drove away.