The legendary Hanging Gardens of Babylon were one of the seven wonders of the ancient world. They were supposedly created by the Emperor Nebuchadnezzar II, the king of Babylon, for his Persian wife, Queen Amytis. We have a hanging garden in my home town in Sicily, too, and this post has photos of it.

The whole deal with the hanging gardens was that they were elevated on terraces to give spectacular height. If they ever existed, that is.

Some say that the Hanging Gardens were really just a myth invented by the Greeks, whose minds merged the various tales of the fabulous Arabic gardens they had heard of into one ultra-lush super-garden.

The Sicilians do this with Arabic gardens. There were, apparently, lots of them around Sicily in Arabic times, and the Sicilians still point to sites of waist-high weeds, abandoned vehicles and old car tyres and tell you,
“That used to be a marvellous garden created by the Arabs,” and then they list the various plants that grew there, and sigh. They are usually sighing because most of the plants they list produce edible bits. The fact that the garden in question has been nothing but a patch of scrub land for almost 1,000 years doesn’t dampen their sorrow at its passing.

The tragi-comic nature of this situation often reminds me of an erudite Czech friend of my mother’s, who spoke like an encyclopedia and loved house plants. She once informed us, heavy with sorrow,
“My beautiful rubber plant has perished,” and then stood bewildered while my sisters and I fell about laughing.

As far as I know, the only Arabic garden that still exists in Sicily is the Garden of the Kolymbetra in Agrigento. I’ve been there, seen that and got the mosquito bites. It was itchy but beautiful. I will be publishing a blog post about that soon. WATCH THIS SPACE!

Meanwhile, I invite you to enjoy to beauty of this particular Sicilian Hanging Garden in my home town. I snapped these lovely prickly pears in Bagheria today.

Moving to the left, you can see that they stand in front of an old, once-beautiful empty house.

Stepping back, you can see that, actually, they are growing on its balcony. Yes, this really is a Hanging Garden! 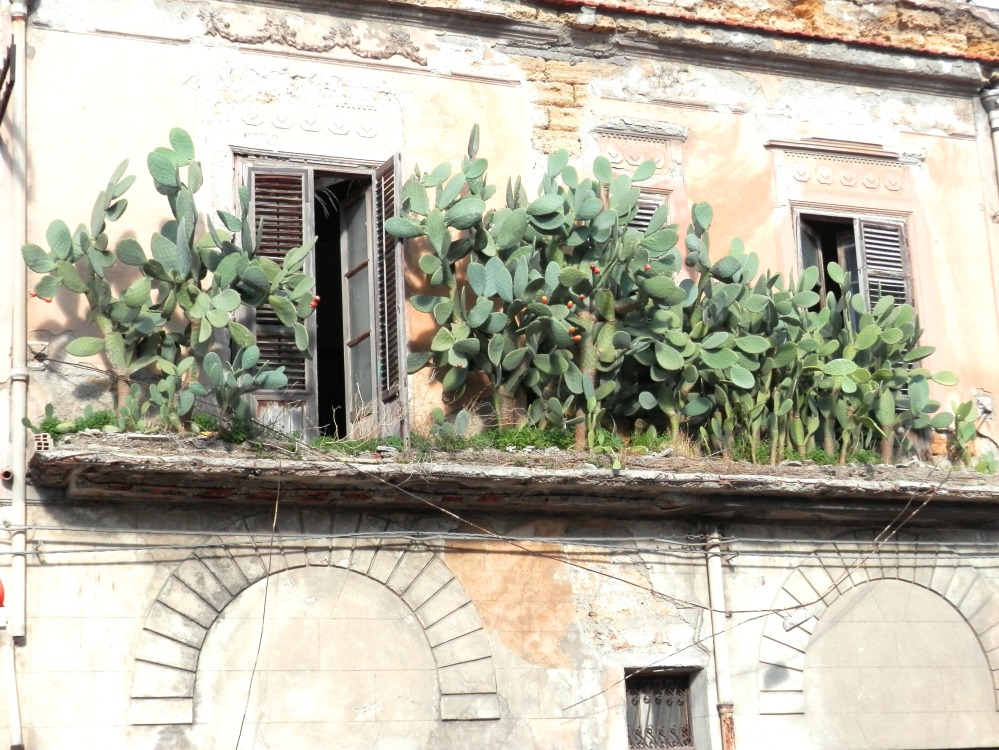 Here’s the whole house. They had to block off the pavement at the front, just in case the Hanging Garden lands on you. That would be unpleasant, I would wager. Not only would you be buried in a few tons of masonry, you would get prickly pear thorns jabbing through your (broken) bones.

And in case you think I headed to an abandoned building site – oh no no! – the house stands between inhabited buildings in one of the town’s most well-used streets. It is in fact the State Road SS113.