Ah, my legs hurt! What a long uphill hike that was! 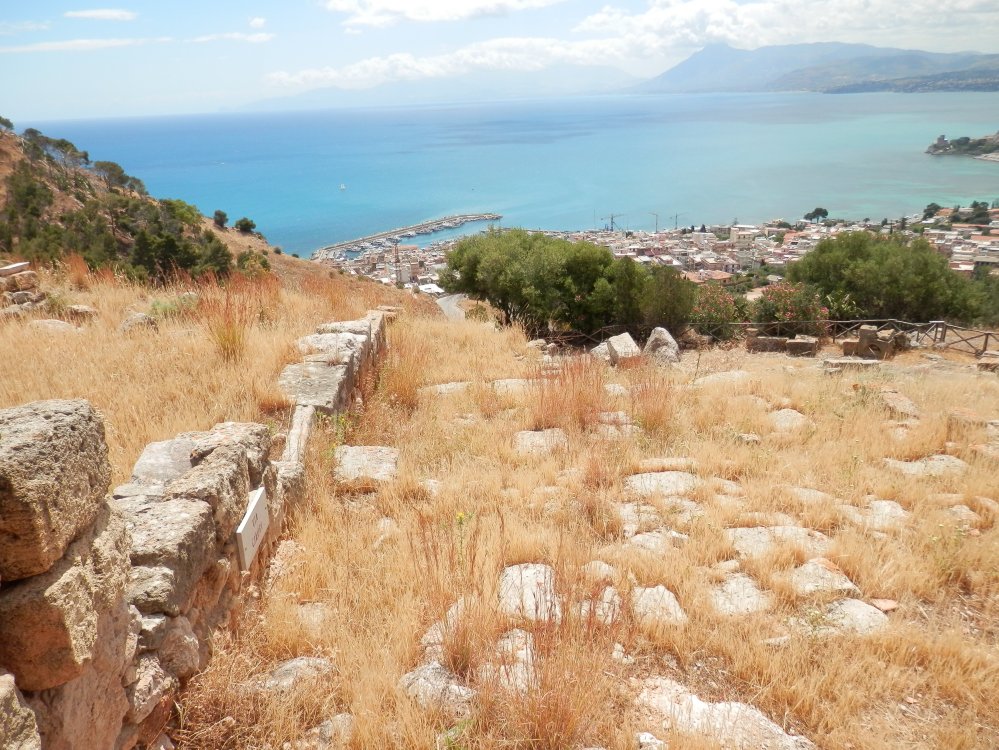 Solunto was a city close to Santa Flavia, on the north-western coast of Sicily. It was founded by Carthaginians (from the city that is now called Tunis) when they colonised Sicily in the 11th century B.C.

That was an awfully long time ago to be building such swanky cities on the top of high mountains. It was also long before any Arabs turned up in north Africa. Some people like to claim that African civilisation all came from the Arabs, and that they never did anything impressive before then. Solunto proves them wrong.

Solunto was such a nice city that the Greeks conquered it and took it from the Africans. Then the Romans took it from them. So what you see now is a mix of three different cultures.

Here’s the main road, which leads past the shops and some houses and also some well preserved Roman public toilets. I had so much fun demonstrating the use of the toilets to my friends that I forgot to photograph them. Sorry!

The Carthaginians had to lug most of the rocks up the hill by hand, as there are not many rocks naturally occuring up the hill where Solunto was built.

These columns form a square shape. The colonnade surrounded an open-air courtyard in the middle of a building of offices. This type of building was called a basilica and was invented by the Greeks. The individual offices all around the columns were rented by lawyers, bankers and scribes who would draw up contracts, register property sales, make loans, and so on.

In this photo you can see part of the back wall of these offices still standing.

Such transactions were never carried out without making a sacrifice to the relevant god to make sure it all went well. The sign at Solunto calls this a “temple” but temples were rectangular, never square, and their columns went around the outside of the building, not an inner courtyard.

When the Roman world became Christian, they modelled their first churches on these basilica rather than on the pagan temples. In the early days, the entrance areas of churches were used for a lot of business transactions…. then people would proceed up towards the altar to pray.

This well preserved mosaic in a Roman house shows a special symbol that was sacred to the Greeks, Romans and to Hindus today: the swastika. Many Hindus today still paint these on their doorstep to protect the house from evil.

These three religions all originated as one, and the relevant languages – Greek, Roman and Sanskrit – are sister languages too. Hinduism has evolved and changed over the centuries under the influence of the Indian climate and countryside, but some of the Hindu Gods are actually Roman gods too. Dyaus Pitar, the Hindu god of the sky, for example, was called Jupiter by the Romans. 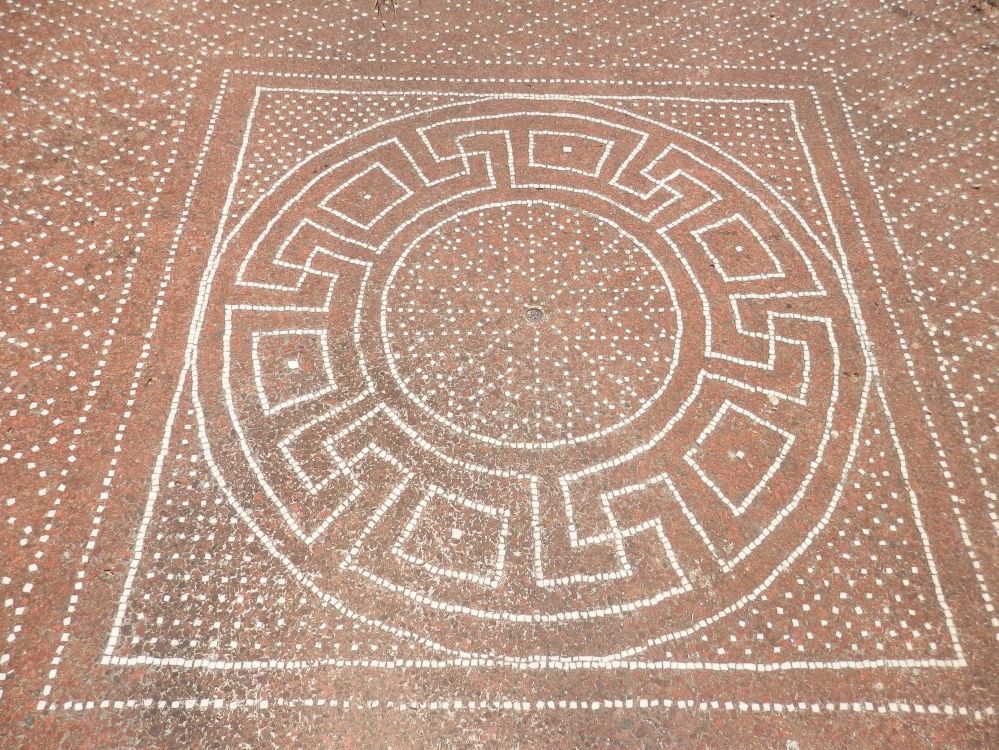 We all know the Greeks and Romans used pots instead of Tetrapak cartons and plastic bags. The Africans were keen pot-makers before them, actually.

These ones were for storing oil and grain, mostly, and they were buried in the ground up to their necks to keep their contents cool and fresh. These particular pots are from the Roman period. 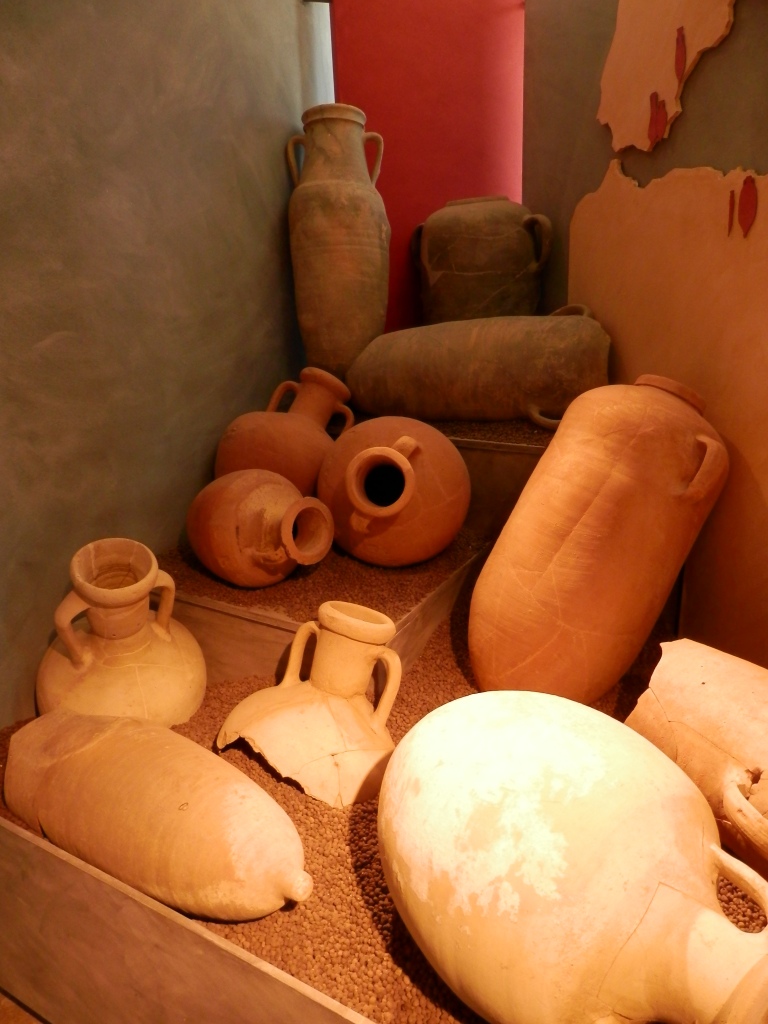 This is a classic Roman “matron” statue, in other words, a statue of a virtuous Roman married woman. Her hand would have been holding the bobbin from her spinning wheel to prove what a good wife she was.

It was standard practice for rich men, whose wives usually had their spinning done by servants, to put one of these in their hallway to remind people their wife was a good woman, and stop the gossip.

The museum label says this is the Roman goddess Minerva but I have no idea why: she does not bear a single one of the symbols that were used to identify Minerva in art work. 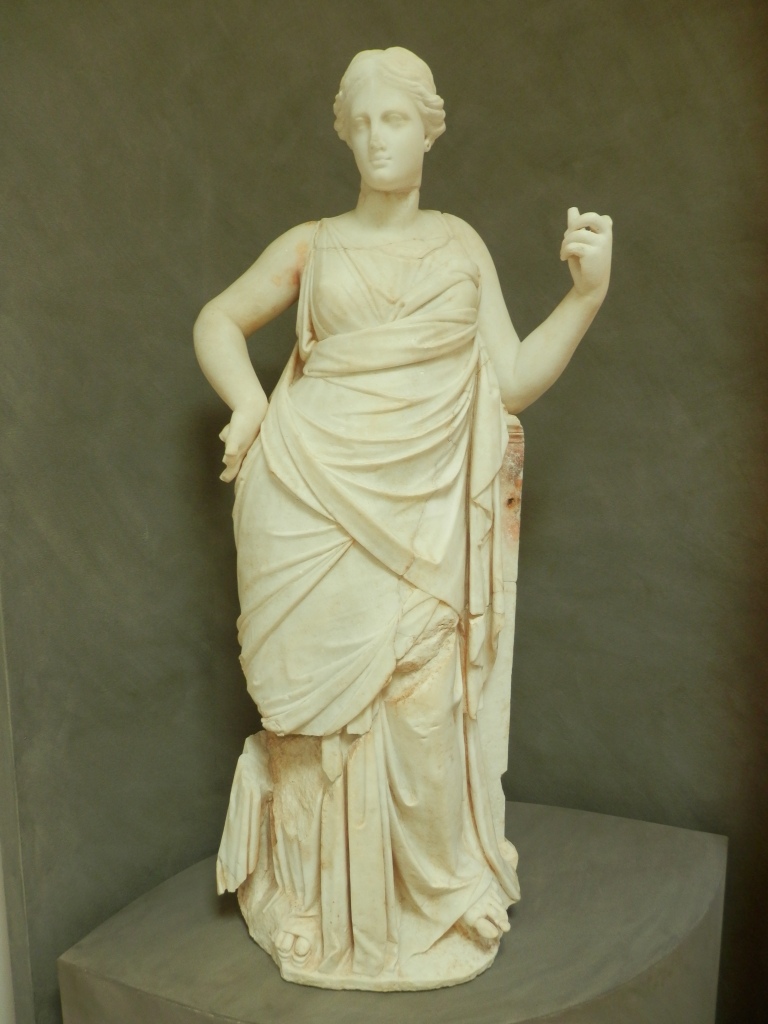 Can you guess what this is?

Most people know that the Greeks and Romans liked their public baths, but they used private ones for their babies and children.

This terracotta would have kept the water hot for quite a long time so you could probably wash several kids in the same water, one after another. 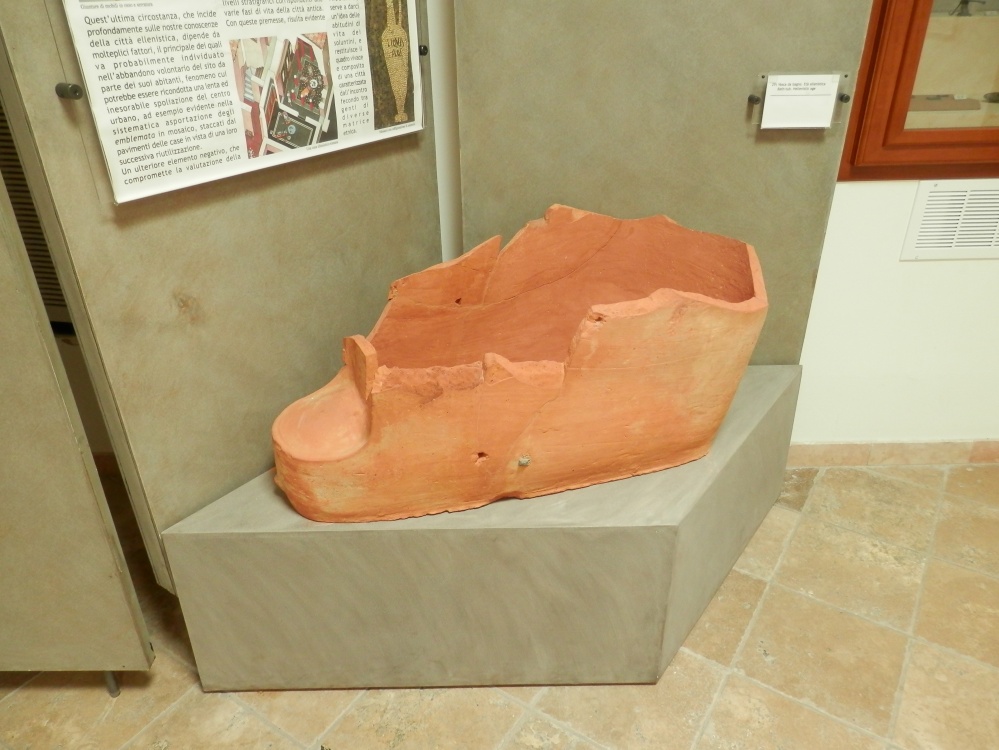 So what do you think of Solunto?

It is a long walk up the hill, but its a pity nobody lives there any more!