When you say “Martial Arts,” most people think of Karate chops, Judo throws and the other unarmed combat techniques of the Far East. Yet it’s actually Italy and Greece which have the oldest martial arts traditions in the world.

All they need is someone as cool as Bruce Lee to make them world famous!

Here’s my guide to the three main Italian martial arts, and two Sicilian ones, rated arbitrarily by me according to criteria I plucked out of thin air. Which one would you like to try?

The oldest Italian martial art (and the oldest in the world apart from Greek Pankration) is training in the use of the gladius or stubby Roman sword, originating in the 3rd century BC. It was learned by all Roman soldiers.

This was used to create the world’s first Empire to span three continents, which proves it’s the best martial art ever. 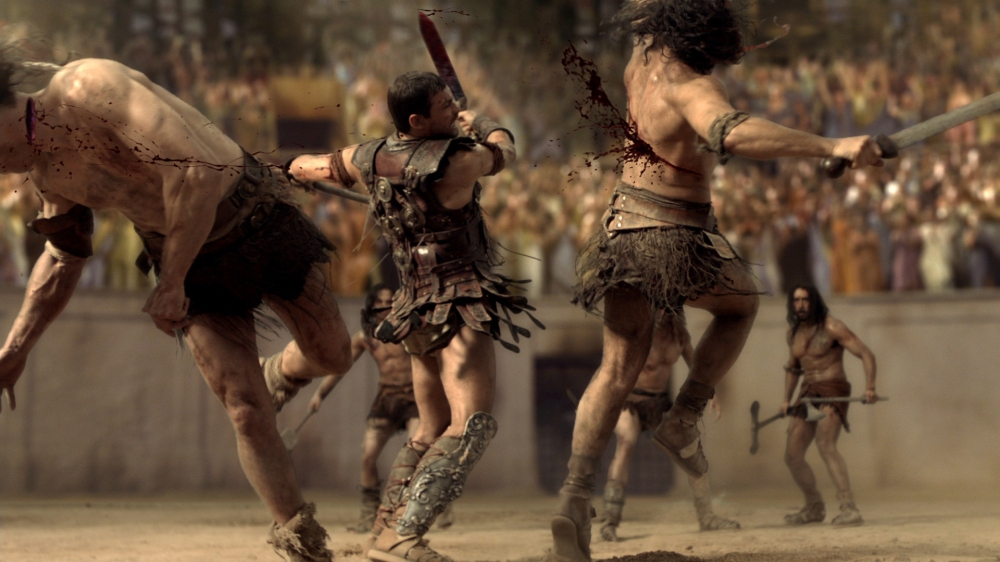 There are various schools in Italy where you can learn gladiatura, mainly in Rome. If you fancy a unique holiday, you can undergo gladiatorial training for a day, a week, or longer. The Scuola Gladiatori Roma is my favourite, partly because its address is 18, The Appian Way, and partly because their website has lots of fun photos.

If you don’t want to participate, you can just go and watch one of their shows.

2. Paranza Corta, or How to Stab People like a Medieval Assassin

Paranza corta, the Sicilian art of knife fighting, is still an underground secret-ninja type of thing. There are no gradings or tournaments. You have to root around to find someone willing to teach you.

Since it was the art of the assassin, this is hardly surprising. There were versions of this art practised all over Italy, but the Sicilians were the masters, who have kept it alive to this day. This is mainly because it was widely used for fighting duels in Sicily.

The thin stiletto knife was invented in 1400’s Italy, for knights to finish off fatally wounded opponents by sliding it through their chain mail. Very soon, though, its potential as a concealed weapon was realised and it became the indispensable tool of the medieval assassin.

The stiletto could pierce thick leather and many layers of clothing, and was easily hidden up a sleeve. Folding, flick-knife versions were soon invented and sold like hotcakes. The stiletto knife was banned as a result, but to little effect.

It was ideal for murdering someone in a dense crowd and then sneaking off before anyone realised what was happening. The entrance wound would be tiny and, often, bystanders assumed the victim had fainted and tried to revive him unaware that he was bleeding to death internally.

The knife traditionally used in Palermo was a folding stiletto knife called a liccasapuni, which means “soap-licker,” because the blade was coated in soap. If the assassin failed to kill his target immediately, the wound would heal badly and he would probably die later of an infection.

In training, wooden knives are used of course. This demo shows a couple of old fellows demonstrating some of the typical duelling moves in a kind of dance sequence:

3. Bastone Siciliano, or How to kill someone with your Walking Stick

Usefulness rating – 9/10 (In a fix you could use your umbrella or a broom handle.)

This is the ancient Sicilian School of Stick Fighting, also known as paranza lunga or, in some Sicilian schools, Liu-bo. First developed on the island in the 1200’s, when Sicily was plagued with rural bandits, this art of self-defence with a shepherd’s staff was handed down from father to son.

It almost died out until Vito Presti organised a revival in the 1970’s. He trained some younger martial arts enthusiasts, using a broom handle. There are now schools and regional tournaments throughout Sicily, and in a few other parts of Italy.

In tournaments, contestants wear protective gear, unlike these two masters:

The Sicilian Stick-fighting association website, Associazione Nazionale Bastone Siciliano, lists all the schools which offer training and can be contacted if you’re interested in an unusual holiday learning how to defend yourself from mountain bandits using a shepherd’s crook. All the properly qualified instructors are listed on this page.

There are similar schools of stick fighting from many other regions of Italy.

4. Medieval Fencing, or How to win an Olympic medal

Medieval Italy was home to a great many different styles of sword. Sicilians picked up some Middle Eastern and North Africa sword styles and techniques as well. You can see at least three different types in this back-cloth for a traditional Sicilian puppet show:

There are more styles on the Sicilian playing cards.

Fencing is still a very popular sport in Sicily, and Italy won more fencing medals in the 2012 Olympics than any other country.

5. Cavalleria Medievale or How to Joust like a Knight in Shining Armour

I saved the best till last – the ultimate in extreme sports.

Some of them welcome visitors who wish to train with them, for short trial periods or longer training courses. I have visited one to watch the training and, I must warn you, you need to be a bit of a superman. You have to be a skilled rider before you can even start, and you’ll also need great strength and stamina, perfect eyesight, and spatial awareness skills which are off the charts.

One of the biggest jousting events in Sicily takes place at the Giostra di Ventimiglia each August. I met these charming jousting experts in Caccamo, which holds an annual medieval festival called the Castellana in its marvellous crenellated castle each summer:

So, cast your vote: which of these five do you fancy?