I first visited Siracusa two summers ago. The highlight of my trip was visiting the Medagliere (Numismatics Treasury) in the Archaeological Museum and getting to know its charming curator, Rosalba Riccioli.

Blonde and vivacious, Rosalba’s passion for the 2,500-year-old gold coins and jewellery in her care – and the intriguing stories behind them – is truly infectious.

I am delighted that she agreed to write a guest post for my blog, which I have translated from her Italian: any errors are all my fault!

The mint in Ancient Siracusa consisted of special buildings with workshops, and with the collaboration of large numbers of workers. Accountants issued receipts for the precious metals, received as raw materials, and calculated the number of coins that should be minted to make sure there were no thefts! Flautarii were the workers who melted the metal and prepared the blank discs. Signatores carved the images in the dies used to stamp the impression into the coins. In Siracusa, these men were master artists and their coins were regarded in ancient times, as nowadays, as exquisite works of art in miniature. The Medagliere has coins by the leading artists of the day. Malliatores beat the dies into the metal coin blanks with hammer blows to create the embossed images on the coins. There were lots of Officinatores who were unskilled workers. 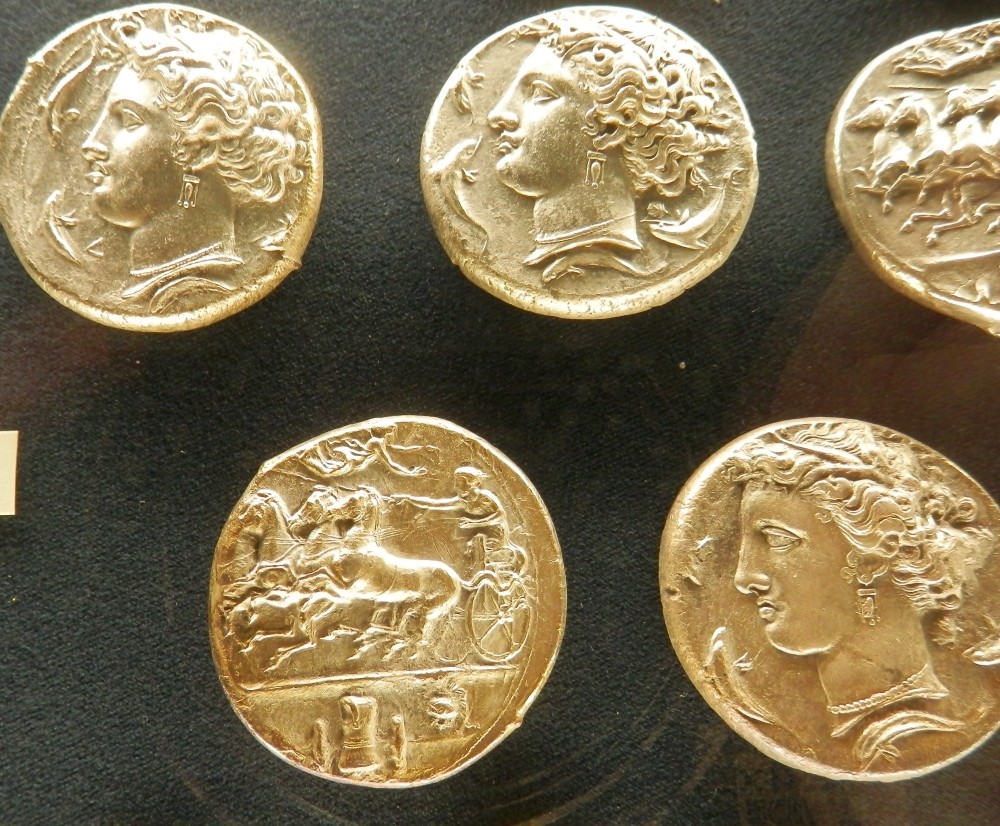 This is information about the ancient Siracusa mint and its workers is not written on the information panels in the museum, but are notes I took from a visiting professor.

An extraordinary treasure of Greek Republican coins was found in 1963 during construction of a building in Via Tevere in Syracuse, and this is now displayed in the Medagliere. This treasure was most likely hidden in early 80 B.C. The owner had probably hidden these coins in a wooden container which then rotted and crumbled away, and these silver coins were all oxidized with each other into a solid lump. People usually did this if they felt they had nobody to trust to look after their wealth safely, and they always intended to dig it up shortly afterwards. The hoard consisted of 1,107 coins. The coins have now been separated and are all displayed, shiny as new, in the Medagliere.

Greek women liked to wear make-up made from natural substances. Too much, very showy make-up was considered vulgar. Greek women were particularly fussy about hair care and were experts in using dyes and bleach as well as natural conditioners. They loved highly elaborate hairstyles and never left their hair loose, instead either gathering it in a bun called a krobylos at the nape of the neck or in a beaded, fancy net called a sakkos. Both of these styles can be seen on many of the coins in the Medagliere, particularly the beautiful coins engraved by the master engraver Kimon Euainetos.

The chiton, the long robe worn by Greek women, was often held at the shoulders by fibulae, large elaborate brooches which are frequently found in archaeological excavations. The fibulae were more than just utility objects and really served more for beautification. We also find shoes in excavations, sometimes embellished with semi-precious stones.

In the Medagliere there is a set of jewels found in an ancient grave excavated by Paolo Orsi in Syracuse. He was a prestigious archaeologist and founder of the Archaeological Museum of Siracusa. This particular hoard consists of a necklace, a ring and earrings, and it is thought that they belonged to a young girl because of the small size of the ring.

Paolo Orsi spent his life excavating ancient sites in Italy and creating museums. The Archaeological Museum of Siracusa bears his name in honour of the work he did for it.