I’ve been meaning to write about Sicilian electricians for a while. I needed to accumulate a good set of photos, though, as pictures speak louder than words.

Sometimes, in fact, they scream while shuddering all over, with their hair standing up on end, fizzing with 240 volts. 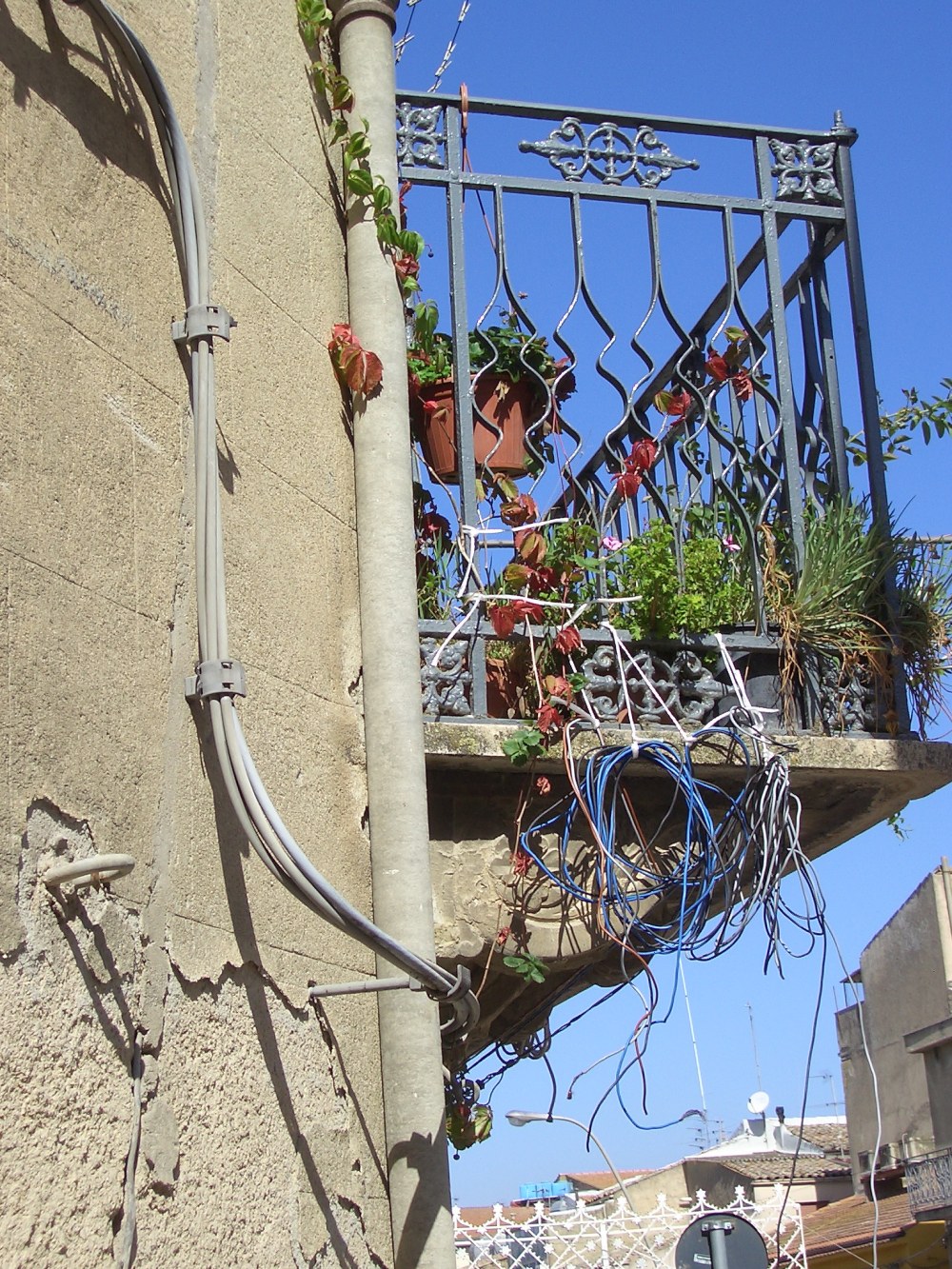 While I was taking this photo, the resident of the house emerged onto her balcony. Ahem! Embarrassing! She confirmed that they are indeed live wires connected to the mains. Then she started watering the plants, so I didn’t ask why, I ran away.

Here’s a picture of her neighbour’s house: 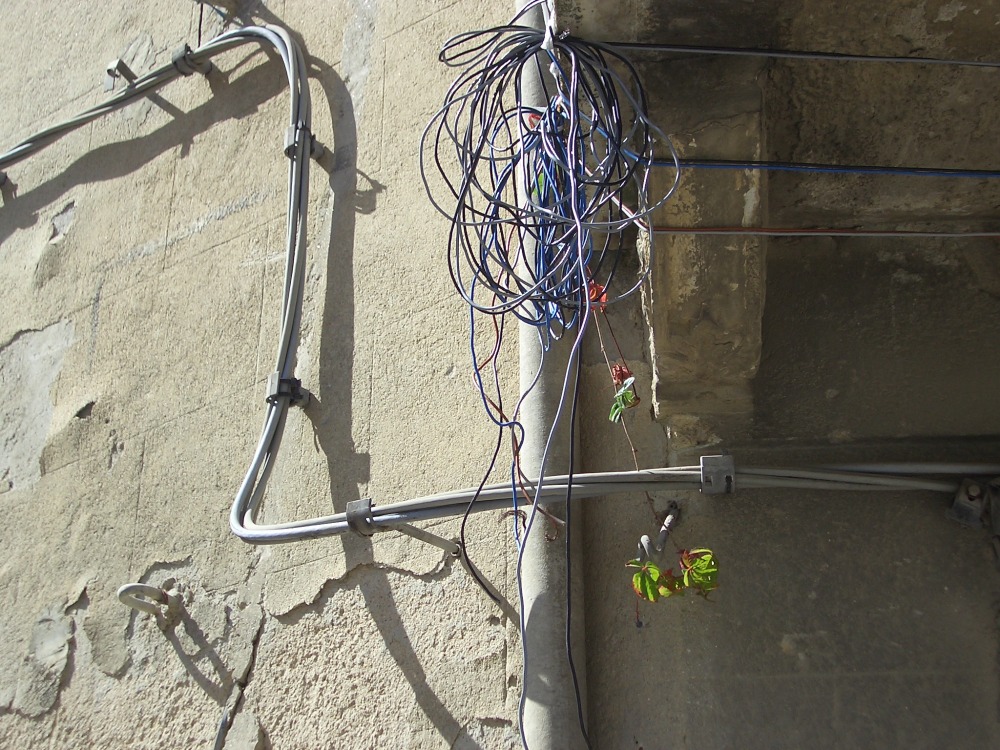 …And another one up the road: This is the proper, safe method of electrical wiring in Sicily and it is usually fine, until the wires stretched out across the road snap, and flutter down, the ends caressing passing vehicles. 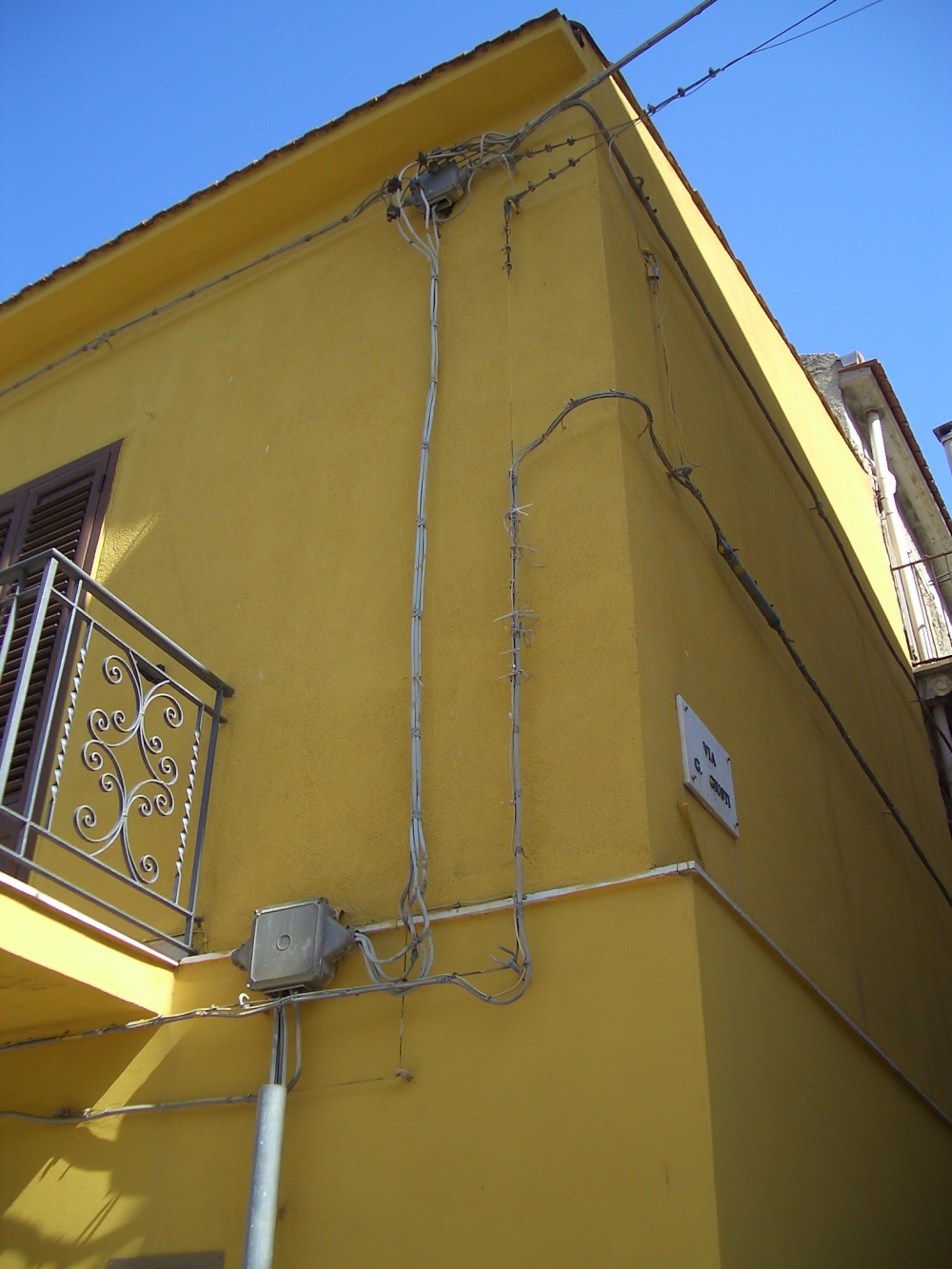 Now for some architecture.

I do adore this one. If you observe the very new-looking doorbells, you’ll realise this gate is in regular use, and forms the main entrance to a large number of apartments. 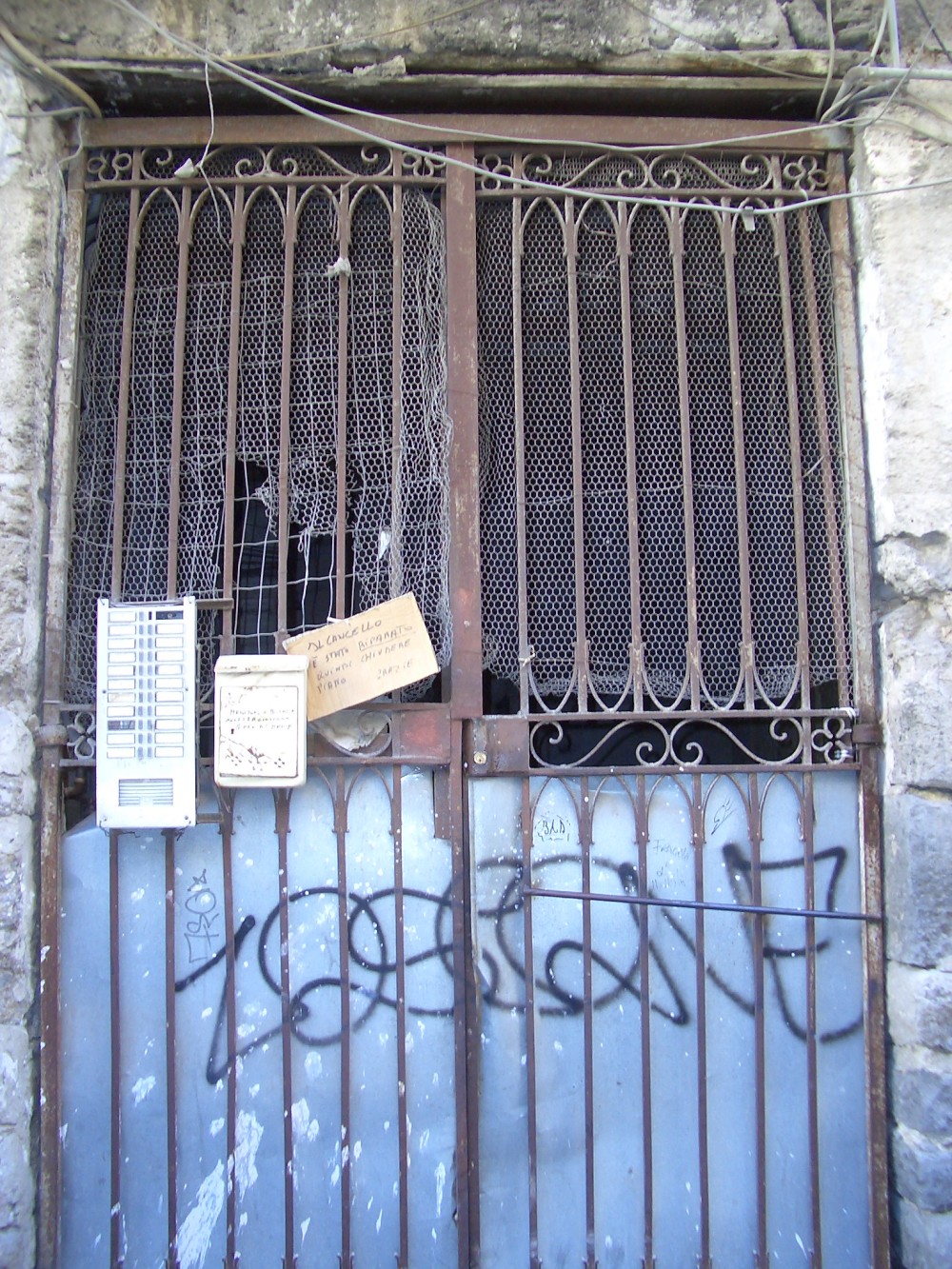 But what makes it so fabulous is the attached cardboard notice, which says…

“THIS GATE HAS BEEN REPAIRED SO CLOSE IT GENTLY. THANK YOU.” 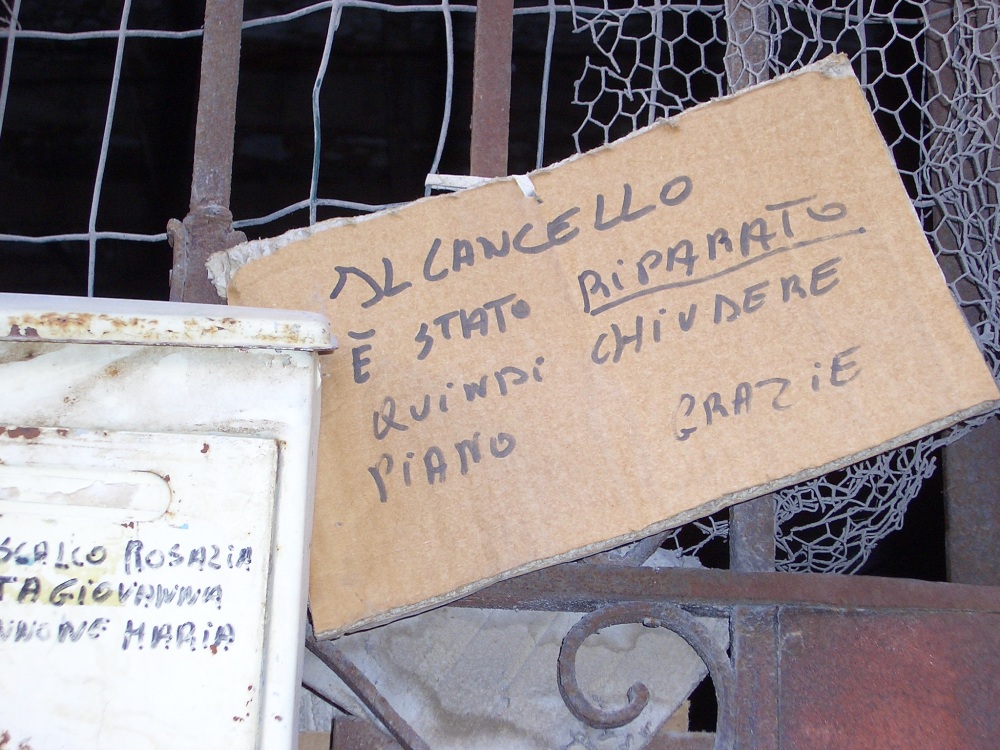 On the other hand, below are some balconies which I believe have not been repaired lately.

Don’t they make a great pair? One has no front and the other has no bottom. Some smart handyman will no doubt soon think of cobbling the two together to make a single, usable balcony.

I would have rung on the doorbell to suggest this to the owner, but I was too chicken. 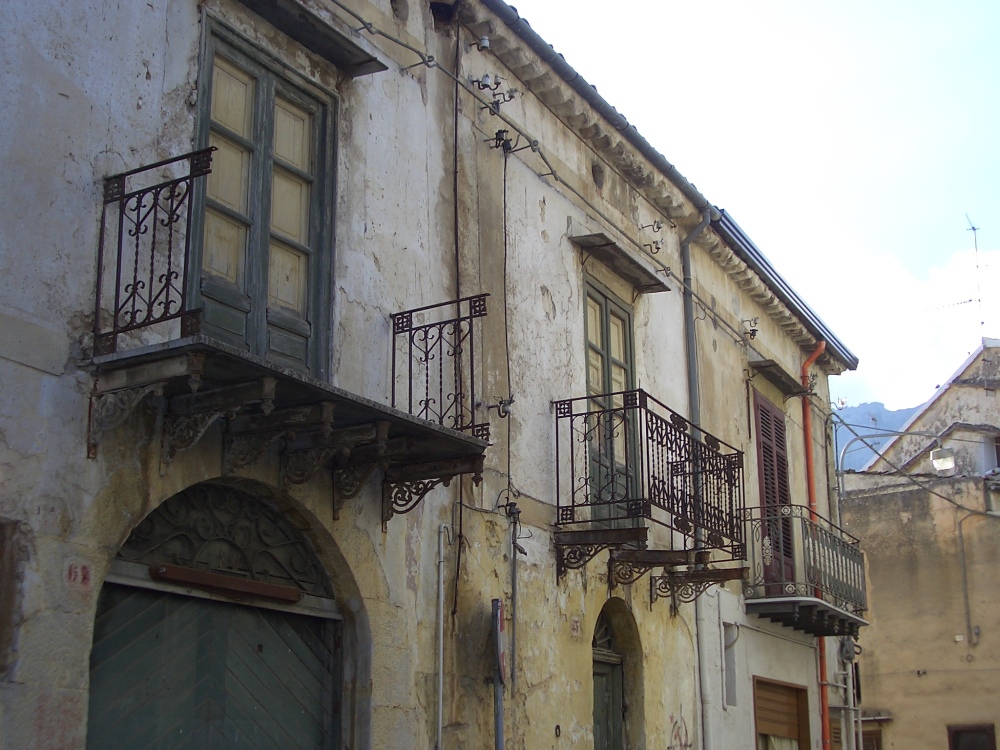 These pictures were taken in two very average towns called Lercara Friddi and Piana Degli Albanesi. I could have taken many photos, indeed more shocking ones, right outside my own front door, but I felt it would be too rude. I took my chances in these towns, as they are very far from my home and nobody knows me.

Yet I must tell you a story that happened in my village.

I was waiting to see the doctor and got chatting to an old man. He told me his son had broken both legs, his pelvis, a collar bone and one arm when a balcony landed on him.

“He was very lucky,” said the old man. He wasn’t being sarcastic. In Italy, people die every year from derelict balconies landing on them as they walk out of their front door.

Well, his son spent a very long time stuck at home and was getting serious cabin fever. He couldn’t even sit up, as he was set rigid in plaster and metal bars. After some months, when he was nearly healed, his best friend came over with his Fiat Uno, opened the boot, put the back seat down and slotted his friend into the car from behind.

“I’m taking you to the pub,” he said cheerfully.

Then his friend got into the driving seat, shut the car door, and the sudden noise made the balcony he was parked under collapse completely and crash down onto the car.

“My son would have died if he had been sitting up instead of lying flat,” the old man told me. “His friend got a broken neck.

“They’re in hospital together now,” he added. “They’re both so lucky. God was looking out for them.”

Here are the rusty remains of a balcony whose concrete base has collapsed: 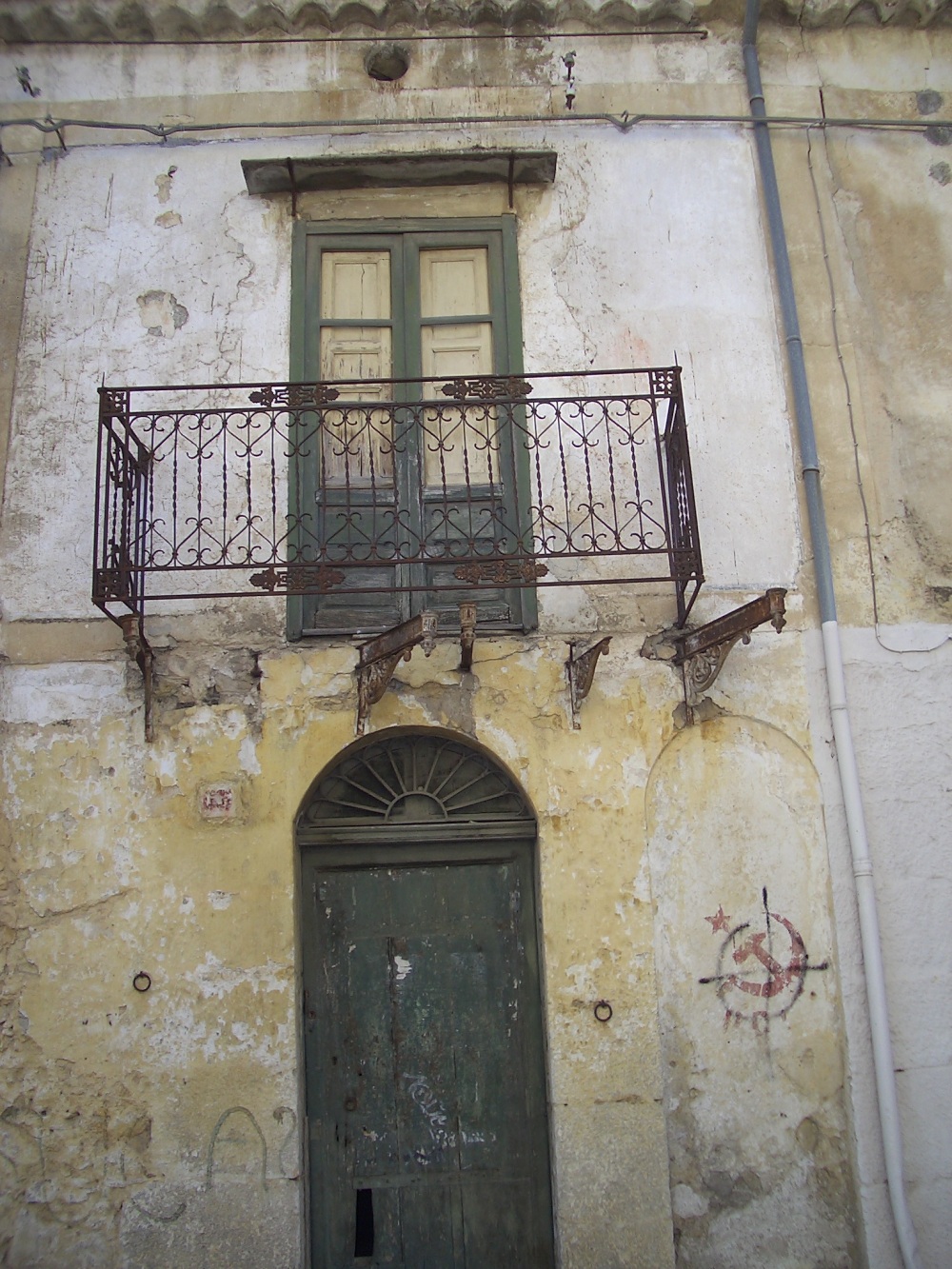 I do hope God was looking out for whoever was under this one when it ended its existence!