A lot of Sicilians would. In fact, a lot of them do.

Of course Albert Einstein is the Poster Boy for cousin marriage. Not only were his parents cousins, but he also went ahead and married his own cousin. His wife was either his first cousin or his second cousin, depending which parent you trace the relationship through.

The first time I was admitted to hospital in Sicily, and the doctor was filling out the cover of the cardboard folder that was to hold my medical notes, he asked me my name, date of birth, blood group and then said,

“Are your parents related to each other?”

I screamed with laughter so raucously that I almost fell off my trolley.

He showed me that there really was a box printed on the form, for him to tick YES or NO, and to write alongside it the specific details of exactly how inbred I was. I guess this is what happens in a society where many people are so pathologically distrustful of outsiders that they only ever get to socialize with their own family.

By way of cultural contrast, when you get admitted to a hospital in England, they fill out that folder by writing your personal details and how many units of alcohol you consume each week (or is it each day?) to the nearest dozen. So you see, whilst Sicilians are a bunch of incestuous teetotalers, we British are genetically diverse beer monsters.

I have a friend in the village here, who used to work in one of the fish factories, stuffing anchovies into jars and pouring oil over them, and handling various other fishy products. This friend told me her heart’s deepest secret last week: she dated the love of her life when she was 18 years old, and they were engaged, but his mother refused to let them marry. She insisted a girl who worked in a fish factory could not possibly be a virgin. Whilst my friend was broken hearted, her beau’s mother forced him to marry his own cousin.

“She was fat. I mean vast,” my pretty friend told me in distress, at the climax of her story. “She was a great matress of a woman.”

So, what are the consequences of all this Sicilian inbreeding? Apart from a physique that resembles bedding?

I think we all know inbreeding can produce genetic abnormalities. There has been a case of a baby, whose parents were cousins, born with a single Cyclops eye. The parents were not Sicilians actually, but Arabs, among whom cousin marriage is even more common. In some Middle Eastern countries it accounts for over half of all marriages.

(In case you hadn’t figured it out yet, the real reason I am making fun of Arab women is because I have met enough of them to know they are stunningly beautiful, and I’m really quite jealous.) Anyway, now that I’ve finished fooling about with Arabs, let me go back to ridiculing Sicilians.]

By the way, the article about the human cyclops baby contains a photo which I have chosen not to reproduce at it is distressing. However I can happily provide a mock-up of the glasses this child may need, should her eye turn out to be short-sighted: 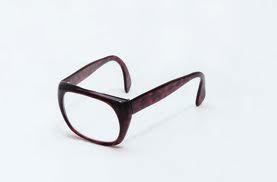 Well, does marrying your cousin, generation after generation, produce cyclopes? In Homeric times, rumour had it that Sicily was inhabited by a whole tribe of cyclopes; one-eyed giants with very low intellects and fairly persistent BO. People routinely discovered cyclops skulls in Sicily right up to recent times.

In 1371, explorer and writer Giovanni Boccaccio reported that he had been present when peasants in Sicily discovered a mighty Cyclops skeleton inside a cave. They dared each other to touch it and, when one eventually plucked up the courage to do so, most of it turned to dust, leaving only three huge teeth, parts of the skull, and a vast thigh bone.

Bocaccio, by the way, wrote the rather racy poem “The Decameron,” the Italian answer to the Thousand and One Nights. He had three illegitimate children and one legitimate one, by his first wife, to whom he was married when he was one year old. Poor fellow, perhaps that was the cause of all his lasciviousness? Gradually realizing you’ve been married to some ugly fat “mattress” of a girl since before you could walk or talk. Crikey, maybe she was his cousin too!

Anyway, in the Odyssey of Homer, when Odysseus reaches Sicily, he is caught by a Cyclops named Polyphemus who lives in a cave. Polyphemus likes human flesh, sparkling wine, and sheep. He does not like housework, bathing, or Greeks. He can often be seen dashing men’s brains out “as if they were mere dogs”. By a stroke of sheer jammy good luck, Osysseus happens to have a few good skins of sparkling wine in his ship. So when this one-eyed giant seals off his cave and starts eating Odysseus’ men one by one, Odysseus manages to ply him with champers (Chateau Goat Bladder vintage) and, in his drunken state, blind him and so escape.

But the point is, were the cyclopes produced by cousin marriage? I don’t think so! Actually my darling hubby’s parents are cousins. Oh yes, they really are! But hubby is very handsome and I can assure you he has two eyes. They’re not even particularly close together. And although he may not have invented some new theory of physics, he’s jolly good at electrical wiring and plumbing.

What ever would Charles Darwin say about all this exaggeratedly selective breeding? Actions speak louder than words; he married his own cousin too. Other famous dudes who married their cousins include Franklin D. Roosevenlt, Thomas Jefferson, Christopher Robin (Winnie the Pooh’s friend from the A.A. Milne books), Samuel Morse (who invented Morse code), H.G. Wells, Edgar Allan Poe and Saddam Hussein. According to the Catholic Encyclopedia, some biblical scholars even think that Mary and Joseph were cousins.

As far as I know, all of their offspring had two eyes. So I think the inbred cousin theory of cyclopes doesn’t hold. I think there’s a different explanation.

Six million years ago, the Mediterranean sea did not exist. It had evaporated and turned into a massive salt bed, as the continent of Africa drifted upwards until it crashed into Europe at the West, which is now Spain, and the east, where the Middle East links Egypt with Russia. Sealed off at both ends, the sea became a huge salt lake, which gradually evaporated.

Then suddenly, five and a half million years ago, the Atlantic broke down a huge mass of land and formed the largest waterfall the planet has ever seen. It was not a river, but the ocean itself, pouring over a land mass between Spain and Morocco, and gradually carving out the sea channel that now separates the two continents of Europe and Africa. Eventually, the map of the Mediterranean basin that we know today was laid out. The Islands were formed, including Sicily, and the animals on them were isolated from the mainland. So they started to evolve differently.

What has all this got to do with cyclopes? I really am going somewhere with this, I promise.

In Europe, back then, there were elephants. Elephants eat a LOT of leaves to reach the enormous size which makes them unassailable to pretty much all predators. The Sicilian elephants did not have such a lot of vegetation, and they did not have any predators on the island anyway. So they gradually shrank, till eventually the Sicilian elephant was no larger than a pony. They must have been so cute! I wish I could have one as a pet.

I still don’t know why the old men in Sicily are so titchy, but I suppose that’s a research project for another post…

The fossils of these dwarf elephants have been found on most of the main Mediterranean islands. They are nearly always found in caves. There are several caves in Sicily where they can be found in great numbers. When you look at their skulls head on, with the tusks fallen off, the hole for their trunk looks rather like a single eye hole. Rather like a Cyclops skull. In a cave called the Grotta dell’Addaura on Monte Pellegrino, in Palermo, a complete little elephant skeleton was found. They have also found cave engravings from the paleolithic and mesolithic eras.

Well, I think that’s how the legend of the cyclops arose in Sicily. From the skulls of dear little elephants. As to the question of whether the elephants married their own cousins, your guess is as good as mine.