As I am having an operation, I am offline for a while. However, I am delighted to have friends who have offered to entertain and educate you with some cracking guest posts.

Today’s guest post is written by Thorwald Franke, an expert on Plato, the lost island of Atlantis and many things historical. He has bravely agreed to write in English even though it is not his mother tongue. I think you’ll agree his quirky way of using English only adds to the character of his article, and the content will truly make you more insightful into modern societies all over the world.

Everybody has heard of Plato and his ideal city: The first Utopia! Philosophers should become kings (or at least the king’s philosophers), and everything would be fine.

But it is not known by everybody that Plato actually tried to turn his ideas into reality… and it happened to be in Syracuse, south-eastern Sicily.

When Plato came to Syracuse for the first time in his life he was driven by curiosity: The old tyrant Dionysius I was ruling, and Plato wanted to know how a tyrant looks and feels. [Wikipedia says “He was regarded by the ancients as an example of the worst kind of despot—cruel, suspicious and vindictive” …What is the good kind of despot like, I wonder? Ed.]

Unfortunately, Plato came too close to the truth, so the tyrant thought it was a good idea to sell Plato into slavery. After Plato was freed by some lucky circumstances, we can imagine his diary entry:

Several years later, the old tyrant died and the young Dionysius II had the great idea of sending a message to Athens: “Please, Plato, make me a philosopher king!” [Wikipedia tells us the aim was to cure him of his “lavishly dissolute lifestyle”. Ed.]

Of course, Plato couldn’t resist such an offer and hurried to Syracuse for a second time. He had the ingenious plan of teaching the young lad: As an educational example, he brought with him a strange story about another big island in the west, next to a sea straits — just like Sicily. It had another great city protected by marvellous walls and castles, with a city center on a small island — just like Syracuse. (Today, we know this story as the story of Atlantis!)

But young Dionysius felt bored of philosophy and started to show that he still was a real tyrant. So, Plato hurried to leave Syracuse again, and what did he probably note in his diary?

Then, several old friends suggested that Plato should have a second try with the young Dionysius. Young people change their mind so easily … thus, to do his friends a favour, Plato accepted another offer from Dionysius, and flew back on board of Syracuse’s Sea Force No. 1. 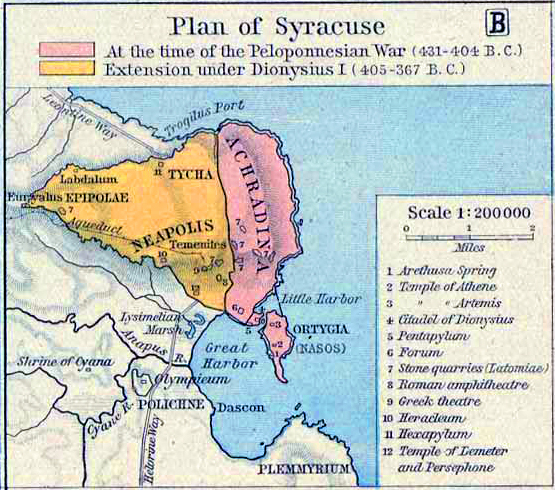 But once he was in the clutches of Dionysius, Plato had to realize that his friends only hoped to calm down a mad tyrant, who now made him live together with some very unphilosophical mercenaries. By a hair’s breadth Plato managed to esacpe the dangerous situation. His diary notes may then have been:

“Big setback! Old friends can’t be trusted, when it comes to politics!” [And also “When ever will I learn NOT to go on holiday to Sicily ever, EVER again???!!!” Ed.]

Finally, Plato’s best friend, Lucky Dion (A human not a dog. Ed.] invaded Syracuse with a band of disciple philosophers from Plato’s Academy (accompanied by some freelancers who did the dirty part of the job), and expelled the ill-bred tyrant. Then they worked together in harmony and started to change the city step by step. Until one sunny day it happened that one of Plato’s disciples decided to join with Syracuse’s old establishment and murdered Unlucky Dion on the street. So, Plato’s diary got one more entry:

“Big setback! Even my own students can’t be trusted!”

And now, after all these calamities, Plato showed that he was a real philosopher: He slammed his ideal city into the trash bin (“only suitable for gods and sons of gods” he wrote) and started new on a blank slate.

Now he considered that in politics no one can be trusted. The result was his last work: the dialogue “the Laws”.

Admittedly still not perfectly modern, but clearly on the right path, it presented for the first time in history ideas like the separation and balance of powers, or elections with proportional representation.

These were the ideas that changed Athens into not merely a prototype democracy, but the forerunner of genuine national democracies, with concepts of equality.

And it happened on Sicily.

[Do not let this story put you off the idea of going to Syracuse on holiday, though. I am personally campaigning for Hubby to take me there for a long weekend as soon as sumer breaks out on this turbulent isle. I hear the city is quite lovely these days. Ed.]

Find detailed information on the Atlantis-Syracuse connection in this academic study by Gunnar Rudberg: “Atlantis and Syracuse — Did Plato’s experiences on Sicily inspire the legend? A study on Plato’s later political writings“.